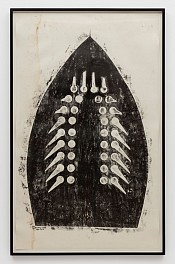 Willie Cole (b. 1955 in Somerville, New Jersey) lives and works in New Jersey.

In 2010, a survey exhibition of his work on paper (1975-2010) took place at the James Gallery of the Graduate Center of the City University of New York and traveled to Memphis Brooks Museum of Art, Sarah Moody Gallery of Art, University of Alabama and Rowan University Art Gallery, New Jersey.

Several of his sculptures were included in Reconfiguring an African Icon: Odes to the Mask by Modern and Contemporary Artists from Three Continents at the Metropolitan Museum of Art in New York (2011).  In 2013, a traveling exhibition Complex Conversations: Willie Cole Sculptures and Wall Works opened at Albertine Monroe-Brown Gallery at Western Michigan University.

Currently, Willie Cole’s work is included in Before Yesterday We Could Fly: An Afrofuturist Period Room at the Metropolitan Museum of Art, New York; works by the artist are also on view at the museum’s Mezzanine Gallery. Willie Cole’s large-scale sculpture commissioned by the Kansas City International Airport will be installed in 2023.