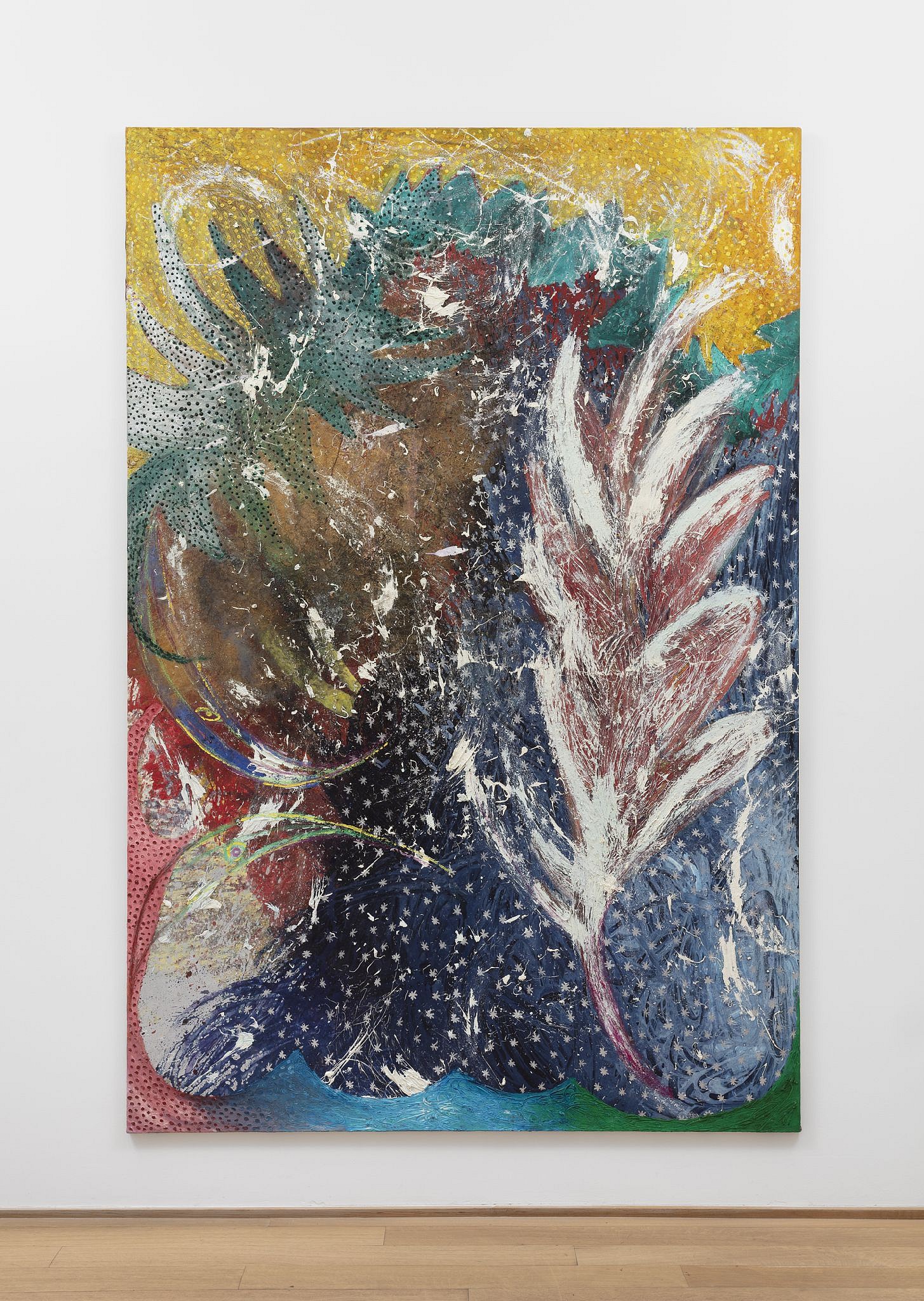 Michael Buthe’s (1944-1994) paintings, drawings, sculpture and painted photographs conjure a universe that is exuberant, dreamlike, extravagant and profane. The works in this exhibition were made between 1968 and 1994 and represent four periods of his oeuvre.

Buthe was born in 1944 in Sonthofen, a town located in the south of Germany approximately 20 kilometers from the Austrian border. Early paintings and drawings which deploy grids and shredded canvases were first exhibted at Galerie Rolf Ricke, Kassel in 1968 and included in the now legendary exhibition, Live in Your Head. When Attitudes Become Form, at the Kunsthalle, Bern in 1969. In the 1970s Buthe spent part of each year in Marrakesh, a place that deeply influenced his artistic production. Gold, denoting divinity, opulence and immutability, as well as various mystic traditions, began to form a central part of his visual language during this period.

Michael Buthe was one of the first artists to present room-size installations as works of art, such as Homage to the Sun at Documenta V in 1972. While few of these installations remain, a sense of the total work still permeates Buthe’s practice and is echoed in his idiosyncratic visual language. In works such as Untitled (Landschaft) 1987/88 and Torro 1992, found objects extend past the limits of the canvas and rearticulate the surrounding space. Late paintings, such as Papagei 1994, feature swirling masses of exuberantly painted color, and border upon the transcendental or, in the words of the artist, “a cosmology of the utopia generale.“ During his lifetime, Buthe exhibited widely in Europe and South Asia and was included in four iterations of Documenta (V, VI, VII and IX).

In the past few years, his work has come under re-examination as its relevancy to contemporary practices has become increasingly evident. In 2015-16 an extensive retrospective was organized by the Kunstmuseum Luzern; S.M.A.K., Ghent; and Haus der Kunst, Munich. buthe/polke: friends, an exhibition curated by Bianca Chu and Darren Leak will be presented at S|2 gallery in London from March 13th to July 16th. A publication including key texts, images and archival material about Michael Buthe’s artistic practice and friendships will accompany the exhibition.