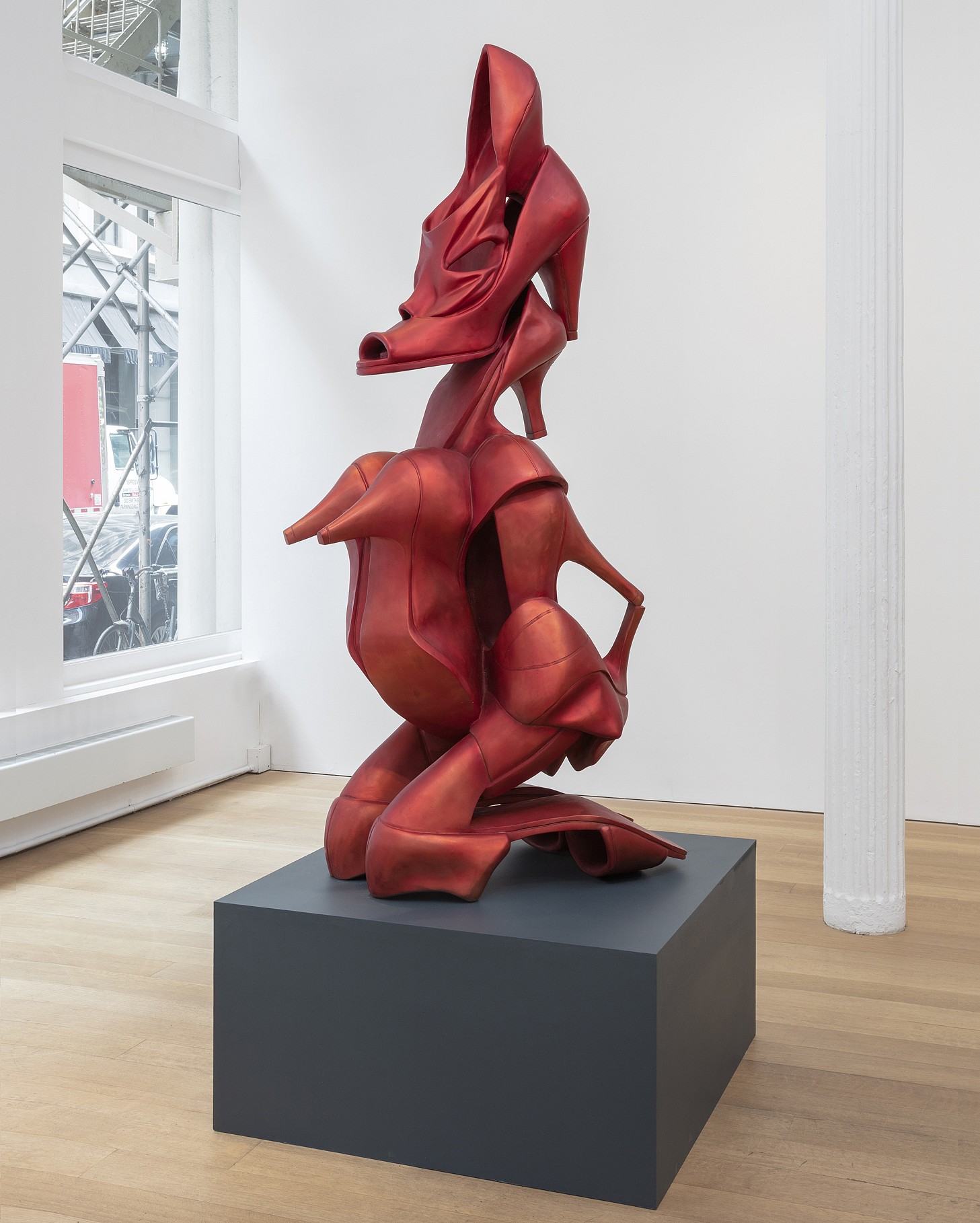 Alexander and Bonin is pleased to announce Bella Figura, an exhibition of new work by Willie Cole. Cole’s assemblages of found objects, such as irons, bicycles, water bottles, and women’s shoes, offer a multivalent commentary on gender, consumerism, sexuality and African-American identity.

A central facet of Cole’s work since the 1980s has been his deployment of high-heeled shoes, which he has recast into pieces resembling furniture, bouquets, masks, animals, and humanoid forms. Uniting these sculptural interventions is the way that Cole incorporates both explicit and indirect references to African arts, cultures, and mythologies. This is particularly present in Woman in Heels 2019, a new 6-foot bronze of a kneeling female figure inspired by Senufo sculpture. The Senufo, who live in southern Mali, Burkina Faso, and Cote d’Ivoire, are known for their bronze and wood sculptures which are often used for divination and religious worship. Also on view are a selection of recent shoe masks and Head Over Heels 2019, a series of portraits on canvas that activate and personify the masks.

Cycles – of water, of carbon, and of energy – have long been a critical concern to the artist. In Wishes for Water 2019, Cole locates an intimacy between water bottles and cells; both consist of a modular unit that becomes a whole through repetition. Similarly, in Sole Flower 2017, worn shoes are multiplied into a mandalaesque, 8-foot wide blossom, reflecting his long-standing interest in Tibetan Buddhism. Together, these works reveal the subtle, humorous poetry at the heart of Cole’s work as he finds beauty in overlooked forms.

Willie Cole was born in Somerville, NJ and studied at the School of Visual Arts and the Art Students League in New York. He lives and works in New Jersey. His work has been the subject of several one-person museum exhibitions: The Radcliffe Institute at Harvard University (2019), David C. Driskell Center, University of Maryland (2016), Montclair Art Museum (2006), Tampa Museum of Art (2004), Miami Art Museum (2001), Bronx Museum of the Arts (2001) and the Museum of Modern Art, New York (1998).