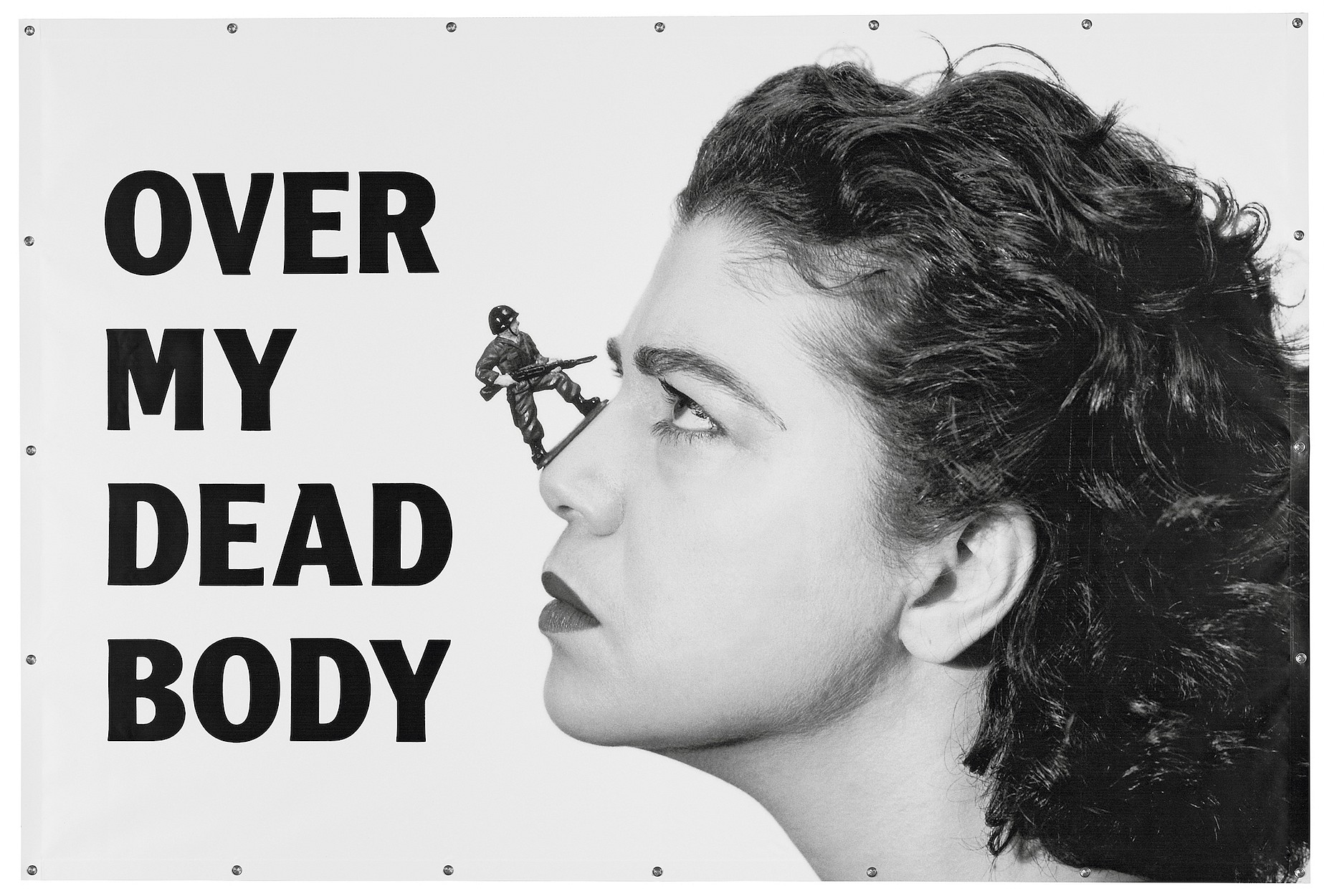 Exposures brings together filmic works from the 1960s to the present that deploy distinct mediums and formats such as billboards, books, and collage, among others. The documentary potential of photography is largely employed to tell fictions and convey abstractions.

The images by Jonathas de Andrade and Mona Hatoum included in Exposures depict the human subject. Andrade’s poetic images of fishermen in northeastern Brazil ritualistically embracing a freshly caught fish evoke a pathos and otherworldliness more often associated with religious iconography. In Hatoum’s Over My Dead Body, a profile of the artist stares down a toy soldier traversing the length of her nose.

Matthew Benedict and Willie Cole insert themselves or a surrogate as a fictional or archetypical character. Benedict’s sepia toned photographs of 1940s era private investigators are constructed from the contents of his apartment and friends dressed in detective drag. Willie Cole is the figure in Sunbeam Male, Ceremonial, a 2004 near human scale image of a modern-day shaman adorned with Cole’s iconic household irons.

Rita McBride’s lens focusses on the abstraction of building topographies repositioning our viewpoint of typical city architecture. Calculations and Abbreviations, a nine-foot-high mural print from 1998 depicts details of adjoining building façade planes. Willie Doherty’s triptych Dreams of Renewal, Dreams of Annihilation is set in a fictional future where the planet is slowly dying as a consequence of pollution and climate change. Doris Salcedo’s For Hans Haacke and Edward Fry weaves together Frank Lloyd Wright’s Guggenheim spiral with images from Haacke’s The Artist and the Slumlord.

Robert Kinmont and Mark Morrisroe play more directly with the photographic medium itself. Included in the exhibition are unique c-prints by Mark Morrisroe from 1982-85 whose spontaneous appearance is the result of a complex if home-made process that layers together color and black and white negatives. Kinmont has described his photo series as being as “structurally meaningful as conceptual sculpture,” and uses repetition, movement and gesture to create distinct sets of photographs that “think about that structural / functional criteria of our brain.” (Ault, Julie. In Step with the Desert: The Morphology of Robert Kinmont. New York: Alexander and Bonin, 2009)