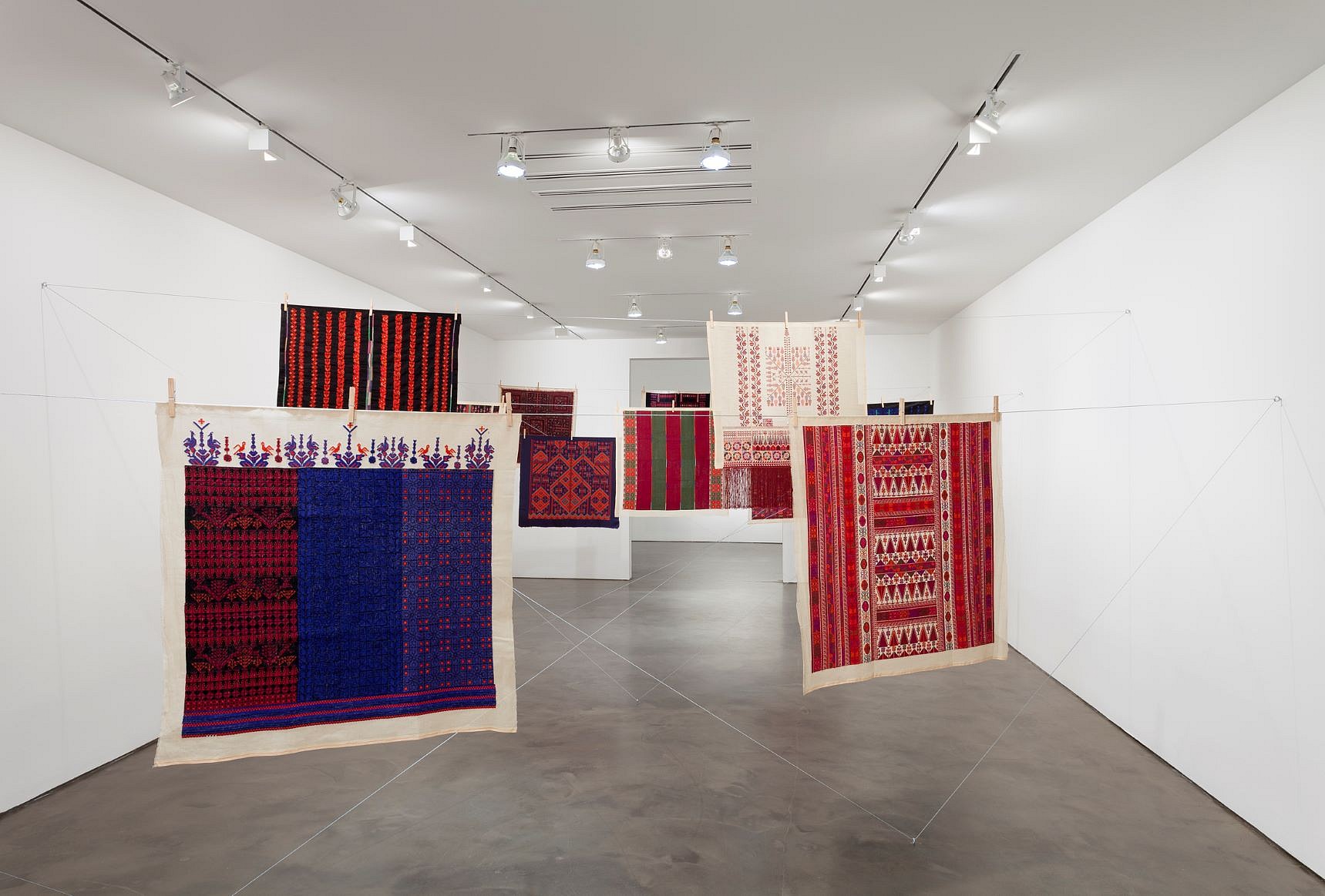 Alexander and Bonin will begin the fall season with a one-person exhibition of recent work by Mona Hatoum.

On view in the front gallery will be Twelve Windows (2012-13), an installation comprised of onemeter-square embroidered pieces of fabric, attached with wooden clothe pins at irregular intervals to a steel cable which traverses the room. These twelve embroidered panels are the work of Inaash; a Lebanese NGO founded in 1969 to provide employment for Palestinian women in refugee camps in Lebanon. Researched and designed by Malak Husseini Abdulrahim, the panels feature traditional Palestinian needlework which has been passed down for centuries. The act of embroidery functions as an act of resistance against the discontinuities of exile. Each ‘window’ represents, through its motifs, stitches, colors and patterns, a key region of Palestine. Pinned to a cable which crisscrosses the space, the embroideries and clothe pins evoke images of everyday life even as the cable dissects and disrupts the exhibition space, creating a metaphor for a divided territory.

In the second gallery, Hatoum will exhibit Cells (2014), a steel and glass work whose form relates to earlier iconic installations such as Light Sentence (1992). A bank of 32 institutional lockers are populated by numerous hand-blown glass shapes, each suggestive of an organic bodily form. These corporal motifs are also explored in several recent drawings and a new work composed entirely of human hair. For Hair Mesh (2013), Hatoum has knotted and woven together hair in three shades of brown, to create a minimal grid; an organized and precise pattern that vividly contrasts with the unstable and organic material from which it is composed.

From 1980 – 89 performance and video predominated Mona Hatoum’s work. She began to exhibit installations and objects in 1989 and her work has been the subject of numerous oneperson museum exhibitions in Europe, North America, Asia and Australia. In December, Hatoum’s first solo museum exhibition in South America opens at the Pinacoteca do Estado de São Paulo and travels to Fundación PROA, Buenos Aires in March, 2015. A survey exhibition organized by Centre Pompidou will open in Paris in June 2015 and travel to additional European venues in 2016.