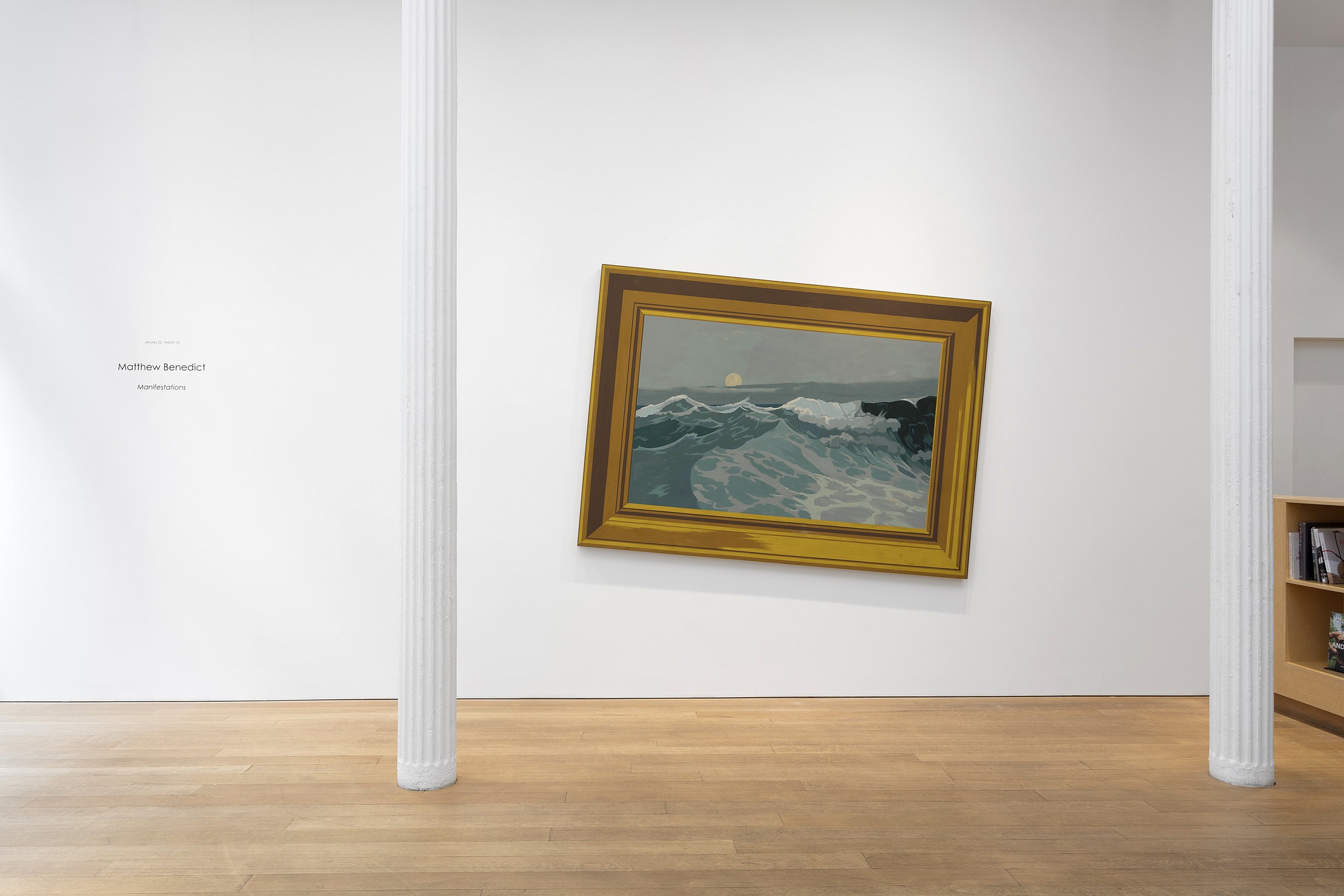 Alexander and Bonin is pleased to present Manifestations, an exhibition of paintings by Matthew Benedict. The exhibition includes works that Benedict has made throughout his 30-year career, providing an opportunity to see significant works seldom on view to the public.

Painted in gouache on wood or paper, Benedict employs trompe l’oeil framing, illustration, and decorative arts conventions in his portraits, seascapes, and still lives. Benedict’s fascinations with systems of belief ranging from the biblical to the occult are embedded in the work as are literary references and contemporary allusions. The artist’s paintings relay archetypal or mythological narratives, deliberately pulling parables from the ancient past into the present. Benedict grew up in New England, which is reflected in the maritime themes and legends that are prominent in his work, though the mythologies are often conflated with modern imagery and staged recreations that sometimes include evidence of their own artifice.

The earliest works in the exhibition are San Lorenzo of Rome and Saint Joan of Arc, the first of which was exhibited in the windows of the Grey Art Gallery in 1993. Depicted in near life-size scale on large sheets of paper, Benedict’s interpretations of Catholic saints are integrated into his work as modernized bearers of symbols of the transcendental. Initially shown in a large survey exhibition of Benedict’s work at the Von der Heydt-Museum/Kunsthalle Barmen in 2008, The Black Borsalino displays a collection of objects, a wand, two coins, three swords, and a seven of hearts, all motifs which indicate the omnipresence of magic and transformation in Benedict’s work. Also included are paintings from a 2008 cycle of works inspired by Arnold Böcklin’s paintings of the Isle of the Dead, which draw from Benedict’s experiences visiting two real-life “Isles of the Dead”, Isola San Michele, the walled, gothic, cemetery-island of Venice, and New York City’s little-known Hart Island, located just off of City Island in the Bronx.

Matthew Benedict (b. 1968, Rockville, Connecticut) studied at the School of the Art Institute of Chicago and the New School for Social Research, New York. Benedict has had several exhibitions of his paintings and sculptures at Alexander and Bonin, New York and Mai 36 Galerie, Zürich. In 2008, a large survey exhibition of Benedict’s work was presented at the Von der Heydt-Museum/Kunsthalle Barmen, Wuppertal, accompanied by “The Mage’s Pantry,” a monograph published by Hatje Cantz. He was in residence at the Versailles /Giverny Foundation in 2011 and had solo exhibitions at Galeria Álvaro Alcázar, Madrid (2008 and 2011) as well as Stene Projects, Stockholm (2013 and 2016). Benedict’s works are included in the permanent collections of the FRAC de Picardie, Amiens; Dallas Museum of Art; the Hammer Museum, Los Angeles; the Museum of Modern Art, New York; the San Francisco Museum of Modern Art; and the NASA Art Program, Washington, DC.